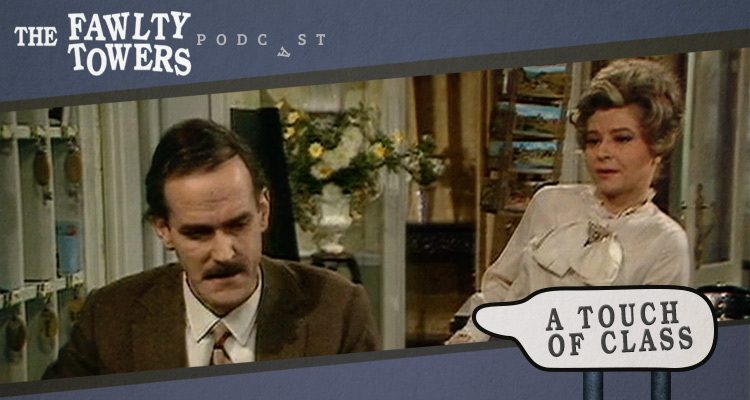 A Touch of Class was the first episode of Fawlty Towers and introduced viewers to John Cleese and Prunella Scales as Basil and Sybil Fawlty, Torquay hoteliers. In this podcast Gerry and Iain try to attract a better calibre of podcast listeners.

Alongside the ubiquitous Cleese and the striking Scales the principal cast was rounded out by series co-creator Connie Booth as Polly, a hotel employee; and Andrew Sachs as Manuel, television’s most enduring image of a Spanish waiter. This episode also introduces Ballard Berkeley as the recurring Major Gowen as well as Gilly Flower and Renee Roberts who play the ever-present duo of Miss Tibbs and Miss Gatsby.

In Episode 1 we find Basil working hard to market Fawlty Towers as a destination for the kind of classy guests he believes he’d enjoy working around. Undercover cop Danny Brown (Robin Ellis) and family man Mr Wareing (Terence Conoley) are of far less interest to him than Lord Melbury (Michael Gwynn), whose arrival causes quite a stir.

A Touch of Class was released in 1975. It is 30 minutes long and originally aired on BBC 2. The show can be viewed on Netflix in the UK and Ireland and is available on DVD around the world.